Is Sofr the Ultimate Replacement for USD Libor?

Financial market participants – at least the largest ones – are actively preparing for the expected discontinuation of the London Inter-Bank Offered Rate (LIBOR) after 2021.Transitioning towards a LIBOR-free world is a challenge that requires the involvement and coordination of the whole industry in order to find appropriate solutions to replace the 35 different LIBOR rates (five currencies at seven different maturities) currently published on a daily basis.

Among those rates, USD LIBOR remains the most significant with the gross notional value of financial products linked to this rate amounting to around $200trillion [1]; a number equal to 10 times the US GDP. 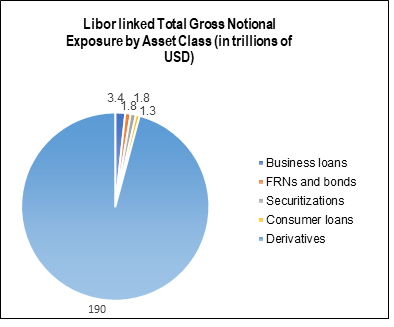 Transitioning towards the alternative Risk-Free Rate (RFR) is challenging due to the various issues prevailing related to SOFR’s characteristics. Progress has been made, however, with some market participants showing a proactive approach to the issue. Nonetheless, more participants need to follow such an approach to ensure the market’s smooth transition away from LIBOR.

SOFR has been published daily by the NY Fed since April 2018. It is an overnight, secured, fully transactions-based rate incorporating tri-party repo data and has the widest coverage of any Treasury repo rate available. In contrast, LIBOR is an unsecured rate, partially transactions based, has various maturities and has been susceptible to manipulation.  Differences between the two rates have caused major challenges for market participants eager to transition to the new rate. As a result, the adoption of SOFR as the alternative reference rate so far hasn’t been all plain sailing.

The major technical difference lies in SOFR being an overnight rate without any structure, whilst the current LIBOR serves different tenors. To tackle this issue, two initiatives have been initiated by the ARRC. First, to answer the question of the floating rate payment and consistently with the International Swaps and Derivatives Association’s (ISDA’s) consultative paper, the ARRC proposed daily compounded SOFR averages with tenors of one month, three months and six months reflecting the most frequent interest payment periods for both cash and derivatives products. These averages would be published on a daily basis after the SOFR publication. Additionally, the ARRC offered to build a forward-looking term rate based on SOFR derivatives markets which are now considered as highly liquid. The term rate is expected to be built before the end of 2021 and should be a solution, as a fallback, for certain cash products offering planned interest payments calculated with a forward-looking rate. Additionally, having a forward-looking term rate may also be a sustainable solution to some of the IFRS hedge accounting requirements.

In addition, while LIBOR includes bank funding risk, SOFR, being a nearly risk-free rate, raises new challenges, particularly in regard to the basis risk. So far the basis risk observed between IBOR curves relates mostly to cross currency basis risk. With the RFRs coming into force, a credit component will come into play to materialize the secured/unsecured features of the curves which may increase, for instance, asset-liability mismatch and hence create management and/or hedge challenges. As a result, the ICE Benchmark Administration (IBA) in 2019 announced the methodology of constructing a forward looking and credit sensitive alternative reference rate –  namely the US Dollar ICE Bank Yield Index[2]. This suggestion received positive feedback from market participants according to whom a credit sensitive benchmark could actually improve the benchmark transition. However, it is still too early to consider ICE Bank Yield index as a credible alternative. Indeed, the index is not officially published yet and there have only been a few transactions, whilst SOFR has already been broadly accepted by the industry and more specifically for hedge accounting purpose.

Beyond those technical challenges, SOFR’s recent volatility adds to market participants’ concerns. Indeed, earlier this year in September, SOFR exhibited a significant spike reaching 5.6% overnight due to borrowing rates for overnight repurchase agreements skyrocketing. This caused skepticism over the robustness of the rate, with ARRC responding that this sudden spike – while unusual – wouldn’t largely impact the rate used in transactions as SOFR is averaged out over 90 days, which smooths out short term volatility[3]. Despite the average smoothing, such swings might still act as a deterrent towards the preparation to transition for certain market participants.

Despite the challenging nature of this replacement rate, progress has been observed. LCH and CME are now both clearing SOFR-indexed swaps; with CME having cleared $21.7 billion notional in SOFR swaps as of the 31st of October[4]. The Inter-American Development Bank and World Bank respectively issued a $600million 3-year SOFR linked bond and a $500 million 5-year SOFR linked bond. Promisingly enough, according to Bloomberg, the total value of SOFR-indexed bonds issued this year has surged by approximately 9.5 times to $73 billion, up from $7.7 billion in 2018[5].

Complementary to the above, regulatory bodies and institutions have made significant efforts to enhance the transition from LIBOR to SOFR. The Financial Accounting Standards Board (FASB) quickly accepted the new alternative rate as a permissible benchmark for hedge accounting purposes and has implemented further action to help stakeholders transition smoothly[6] (e.g. A change in a contract’s reference rate can be accounted for as a contract continuation, rather than a new creation under specific criteria). Aiming to boost ARRC’s efforts for a robust transition, the US Treasury is considering the issuance of a new one-year floating rate note (FRN) tied to SOFR[7], while the Bank of China has issued the first ever SOFR-linked FRN in Asia[8]. And additionally, ISDA has launched multiple consultations to implement the adjustments for fallback language on derivative contracts[9].

The transition to SOFR is unarguably challenging and a source of many concerns and, even though progress has been made, it is not yet clear whether the pace of transition is fast enough. Despite these obstacles, SOFR remains the preferred alternative reference rate. In particular, the New York Fed is supportive of SOFR and keeps encouraging market participants to prepare for LIBOR termination, which starts with them ceasing to issue LIBOR-linked contracts and issuing SOFR-indexed products.

However, while progress is ongoing, one wonders whether initiatives such as the US Dollar ICE Bank Yield Index will undermine SOFR’s nascent liquidity by fragmenting the market.

“With the largest institutions actively preparing for LIBOR’s discontinuation, transition is now firmly on the agenda of all financial institutions. Measuring levels of exposure, assessing what the key challenges will be and the impact on internal processes are the first steps to defining a plan for transition. While new benchmark alternatives are discussed, SOFR seems the preferred alternative reference adopted by market participants so far. Going forward, transparent communication with information shared between senior management, external auditors and/or regulators is key to success. In addition, institutions should also conduct clear and transparent discussions with their clients to ensure a smooth transitioning from LIBOR.”

Part of the Further Consolidated Appropriations Act of 2020, the recently passed Setting Every Community Up for Retirement Enhancement Act (SECURE Act) has several important...